CLE INTERNATIONAL at the meeting of Spanish entrepreneurs with the Delegation of the Spanish Government in Algiers. 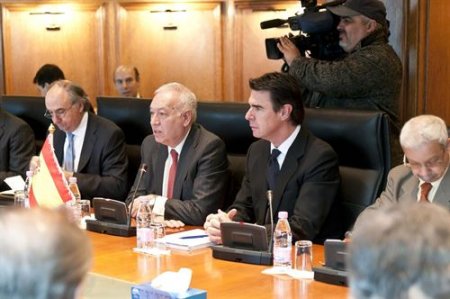 On the visit to Algeria of several ministers of the Spanish government, in April 2014, the Embassy of Spain in Algiers organized a dinner-meeting with Spanish entrepreneurs. With the assistance of AAEE ministers, Mr. José Manuel García Margallo, Industria y Energía, Mr. José Manuel Soria López and the Secretary of State for Trade Mr. Jaime García-Legaz Ponce, were also present the Ambassador of Spain in Algiers, Mr. Gabriel Busquets Aparicio, the Minister Counsellor of the Embassy, the consuls of Algiers and Oran, as well as the director of the Commercial Office of Algiers and several members of the ministerial cabinets and the embassy.

The new Director of the Commercial Office of Algiers, Mr. José María Reyero, invited a representation of Spanish companies present in Algeria (OHL, ABENGOA, FCC, …..), among which was CLE INTERNATIONAL, represented by its director Eduardo González.

During the dinner, political and diplomatic representatives spoke, who highlighted the primary role that the new government plays in international relations as drivers of the externalization of the Spanish economy, in support of the actions of our companies abroad.

Following official interventions, the representatives of the companies who exposed the main problems they encounter for the development of their activity in Algeria took the floor: administrative locks, insecurity created by the changing legislative system, administrative paralysis, inefficiency of the banking system, etc….), which were heard by public representatives, who pledged their support to solve current problems and improve the situation for Spanish companies in Algeria.

All attendees pointed out the important opportunities offered by the emerging Algerian economy, and the need to be present in this market, of vital importance for future Spanish economic development.